Did you know that the Mau Forest Complex is the largest forest with indigenous trees in Kenya? Having said that, the Mau has been on the news for all the wrong reasons. One is that it is being encroached, leading to its degradation.

The main objective of the Green Belt Movement (GBM) is to work towards the conservation of the 5 major water towers in Kenya. These include The Mau Complex, Aberdares, Mount Kenya, Cherangany, and Mount Elgon. The French Development Agency (AFD) has been a great supporter of our efforts to ensure that we sustain these water towers. Thanks to their efforts, we have signed a 4-year grant that will see the restoration of the Mau Complex run until December 2024. The project will cover the degraded Dundori, Nandi North, and Tinderet forests. 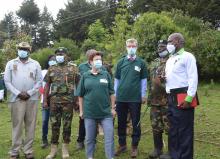 Ms Gitau addressed the stakeholders and urged them to lobby and have the Karura Forest named after the late Prof Wangari Maathai. This follows a motion presented to parliament by Kamukunji MP Hon Abdi Yusuf Hassan.

“There is an intention to rename Karura Forest after the late Prof. Wangari Maathai. I appeal to you the County Government, encourage the people you interact with to say a big yes and have the motion passed, and uphold her legacy because we are walking in her footsteps.

The chief guest, Amb. H.E Aline Kuster Menager took a tour of the various sections of the Dundori Forest. She was taken through a nursery demonstration and how seeds are developed by the community members living within the forest. The culmination of the event saw the Ambassador lead a tree planting exercise in the degraded forest area and in her honor, the Chief Conservator of Forest named the area, The French Corner.

In her speech, Ambassador Kuster-Menager assured the stakeholders of the French support in implementing the project. She said that the project aims to mobilize the communities around the Mau Complex to contribute to its restoration.

“The main objective of the Mau Restoration Project is to tap the potential of the women and young people since they are the key players in the restoration of the Mau Complex,” said the French Ambassador.

The Chief Conservator of Forest on the other hand expressed delight in the partnership and assured everyone that the Kenya Forest Service will rally behind all stakeholders in ensuring that the Mau Complex is completely restored.

“We are working towards the total economic evaluation of our forests beyond the extraction for timber,” said Julius Kamau.

The event concluded by officially launching the project and signing the official Call to Action by all stakeholders towards the restoration of the Mau.