This blog was written by GBM Kenya volunteer, Cynthia Wambaa.

Twenty years ago, Professor Wangari Maathai addressed government delegates at the first United Nations Conference on Environment and Development, also known as Earth Summit, in Rio de Janeiro, Brazil. The world and its leaders were urged to address the growing environmental problems facing the planet. Only the transformation of our attitudes and behavior would bring about the sustainable use of our shared natural resources. 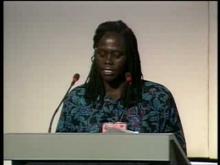 Professor Maathai’s attendance at Earth Summit in 1992 was not without its struggles. In the days leading up to the start of Rio, she was scheduled to go on trial for coup rumors, which was a result of the Moi government’s persecution of her pro-democracy stance. Her lawyer appealed to Nairobi’s chief magistrate for permission for Professor Maathai to miss the court date to attend the Summit and the magistrate agreed.

In the end Professor Maathai did attend the Earth Summit, but so did President Moi and he continuously worked to discredit her and the Green Belt Movement, stating that she was a bad influence on rural women. Despite his efforts, Professor Maathai was chosen by international NGOs as their spokesperson at the Summit.

In front of global leaders, Professor Maathai urged for a more ecologically sound and socially just future for the planet. She stressed that it was time for leaders and countries to harmonize their approach for sustainable development by addressing and seeking solutions for the growing environmental problems.

Today, sustainable development is becoming more integrated into nations strategic growth with the mainstreaming of issues such as poverty reduction, corporate social responsibility and the environmental and social costs associated with poor natural resource management. As Professor Maathai said, “We have come a long way from ignorance to deep insight, from fear to courage and from the streets to Parliament. We moved from self to others, from ‘my issue’ to ‘our issues’, from home to communities, from national level to global. Now we embrace the concepts of our common home and future.” Even though we have come a long way, it is crucial that we do not let our guard down now. We must continue to tackle and speak out on environmental issues like climate change that threaten the well being of people around the world.

Rio+20 is currently underway with discussions that aim to build the green economy in order to reduce poverty, advance social equity and ensure environmental protection on our ever more populated planet. However, as the Summit convenes, it has become increasingly clear that Rio+20 might not create the change we wanted to see. Global leaders have committed to signing a weak agreement that uses language that ‘encourages’ and ‘supports’ initiatives rather than firmly commits governments to action. In the statement on behalf of NGOs, CAN Director Wael Hmaidan said, “If you adopt the text in its current form, you will fail to secure a future for the coming generations, including your own children.”

We must now take a stand and push for the talks to be opened back up. We cannot let another twenty years go by without having a lasting international commitment from all participants, both from developing and developed countries – an action Professor Maathai urged for 20 years ago.