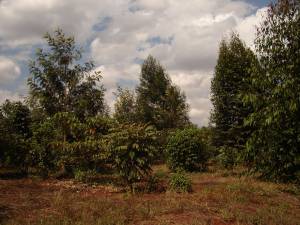 This remarkable video of the Kenyan Television NTV shows the concrete results of the efforts and the commitment of Professor Wangari Maathai in protecting and avoiding the deforestation of Karura Forest, which is a vital part of the city of Nairobi, in Kenya. “Situated on the edge of Nairobi, Karura Forest serves as the lung of the congested metropolis” (Wangari Maathai - Unbowed).

The fight to preserve this unique place begun in 1997, when the Green Belt Movement discovered that the public soil of Karura Forest was allotted to private companies. The project aimed to develop a compound of luxury buildings in the heart of the forest, which would led, as a result, to a consistent deforestation.

The battle to restore this place was long, risky and characterized dramatic events. During a peaceful demonstration, meant to plant some trees in the forest, GBM members were attacked with sticks and Wangari was seriously injured. But this episode did not discourage GBM and the people involved to give up their protest. Finally, in 1999, after two years of efforts and struggles, the developers decided not to continue with the construction of the buildings.

In 2010, after 13 years of restoration through threes plantations, Karura Forest is the amazing place you can see in these images.

“Today, that beautiful forest is still there, helping Nairobi breathe, and more trees are being planted to reseed what was lost and restore its biodiversity and beauty” (Wangari Maathai - Unbowed).