ICC confirms trials for 4 of the Ocampo 6 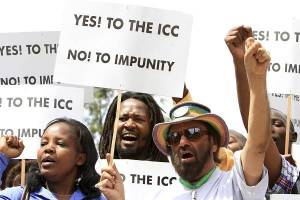 This blog was written by an intern in GBMI’s Europe office, Eliina Brinkberg

The International Criminal Court (ICC) announced yesterday that four of Kenya’s most influential leaders are due to face trial on the charges of helping orchestrate the violence which killed more then 1000 people in the aftermath of the disputed 2007 presidential election. Two of the four men accused are this year’s presidential candidates: Deputy Prime Minister and Finance Minister Uhuru Kenyatta and former Education Minister William Ruto.

The post-election violence in Kenya in December 2007 began after the police forced independent observers to leave the centre where votes were being counted following which the electoral body declared President Mwai Kibaki the winner. The violence that erupted started off as a political riot but ended up in the killing of 1133 people and displacement of approximately 600,000 people. The outbreak of violence was the worst in Kenya since the independence in 1963.

The pre-trial Judge at the ICC, Ekaterina Trendafilova confirmed the charges yesterday (23rd January 2012) and added that, “the Prosecutor established grounds to believe crimes against humanity were committed. The Chamber also found that these crimes were committed were targeted to specific groups”.

“Many Kenyans have, for many years, suffered the injustice of being hounded out of their homes every election year; their properties destroyed, people killed and maimed, and thousands of women and girls raped. It’s time that the voices of these victims are heard.

Since its founding, GBM has advocated for laws that embody the tenets of human rights and democracy. GBM was at the forefront of the campaign for a people’s constitution, brought into force with the new Kenyan constitution in August 2010, whose foundations are based on democracy and the rule of law.

Our view about justice for the 2007 post election violence victims was that Kenyans were best suited to try their own through an independent tribunal specifically established to deal with these crimes. However, this option was fought against by politicians including those who are now to stand trial, Kenyans are looking up to the ICC to deliver justice to the many people uprooted by the politically instigated unrest which was intended to depopulate particular ethnic communities from certain areas.

We advocate that Kenya works towards solidifying the gains made in the struggle against impunity: by supporting an independent and robust local judicial system, and complying with all international treaties and conventions that safeguard human rights, democracy and peace.

GBM hopes that yesterday’s ruling will be viewed as a step in the right direction towards a tolerant, democratic and more peaceful society. No one will ever be above the law!”