By Grace Brouillette and Asa Krieger

On November 9th, 2021, around the 10th anniversary of her passing, the Green Belt Movement (GBM) Director and staff hosted two St. Lawrence University interns with a guided tour and commemoration of the late professor Wangari Maathai’s life through Karura Forest. The GBM staff and interns were guided by John, who was one of the first staff members to be hired at Friends of Karura Forest and is considered by many as ‘the walking museum’. As interns of St. Lawrence University and students of environmental studies, GBM bolsters our knowledge base through experiential learning and interaction with the local environment. We hope to learn about the projects that GBM has initiated throughout Kenya and how they have positively impacted the environment, community members, and the relationship between the two. As an exercise of experiential learning and as an introduction to Professor Wangari Maathai’s work the guide through Karura Forest included visiting Wangari Maathai corner, the Karura caves and waterfall, Lily Lake, and the locations where Prof. Maathai encountered the construction company responsible for deforestation in 1999.

As a brief history, before the 1999 reclamation of the Karura Forest for Kenyans and the local environment, the forest was land grabbed and cleared by colonists. Additionally, indigenous species were removed and replaced by exotic species. After inheriting colonial structures and philosophies on land ownership, President Moi viewed the forest as the property of the state and thus enriched himself, his political friends, and followers through the exploitation of the ecosystem and deforestation in 1992. The late Professor Maathai struggled and persevered through violence, including a blow to the back of the head during the 1999 confrontation, and faced gender-based discrimination from the Kenyan government and officials, including President Moi, because she demonstrated that she could mobilize women and challenge oppressive governmental practices. Triumphantly, Prof. Maathai's struggles were worth it and are visible today with the growing presence of indigenous species, ecological services, and community involvement and employment within the forest; as well as holding strict expectations for Karura Forest with no industrial development and only maintenance of the forest for the people with its beauty and its recreational services like the walking paths, caves, waterfalls, lake, tennis courts, and football field. 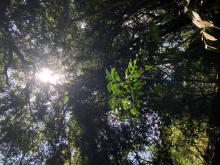 By preserving the forest’s ecosystem, Prof. Wangari Maathai ensured the protection of ecosystem services, community employment, and recreation for future generations. The Karura Forest provides services to Nairobi including water supply and air filtration, greenhouse gas sequestration, and refreshing microclimate regulation through the diverse presence of wetlands, bamboo stretches, and indigenous species plots. The community benefits from the forest with employment as well as free firewood collection on Tuesdays which can be used in clean-burning stoves provided, in part, by the Green Belt Movement. 115 community members are employed to protect and maintain the Karura Forest and thus, the legacy of the late Prof. Maathai. Employment is offered through the Friends of Karura Forest, FKF, and the Community Forest Association, CFA; specifically, the FKF scouts who are unarmed forest guides who create a ‘social fence’ around the forest by sharing indigenous, local, and cultural knowledge with community members and preserving ecological forest values.

Unfortunately, against the Professor’s wishes, the government, the Kenyan Forestry Service, is involved in the Forest by employing armed rangers who stand guard at the gates and the construction of electrified fences that negatively impact wildlife presence. Additionally, entry fees compromise the social aspect of the forest because of the lack of accessibility for all Kenyans; however, these fees are put toward preserving the forest and the legacy of the late Prof. Maathai, constructing protective electric fences, planting indigenous species, and paying tour guides and employees, as well as any research done in the forest. Despite the presence of the government and the history of degradative government practices, there is currently a progressive 20-year agreement between the Kenya Forest Service and the Community Forest Association that ensures regenerative and indigenous management and practices. 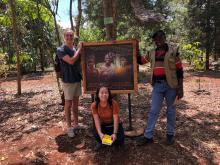 The late Prof. Maathai’s legacy is visible through the increasing community support of the forest, historically healthier relationships between community members and the Kenyan government, and essential ecosystem services that protect the health and wellbeing of the local community. We celebrate Wangari Maathai Day and African Environment Day every March 3rd to commemorate Professor Wangari Maathai and emphasize the importance of environmental protection and community cohesion.