Remembering the Remarkable Life of Margaret (Peg) Snyder, a Long-time Friend, Supporter, Advisor, and “Midwife” to the Green Belt Movement 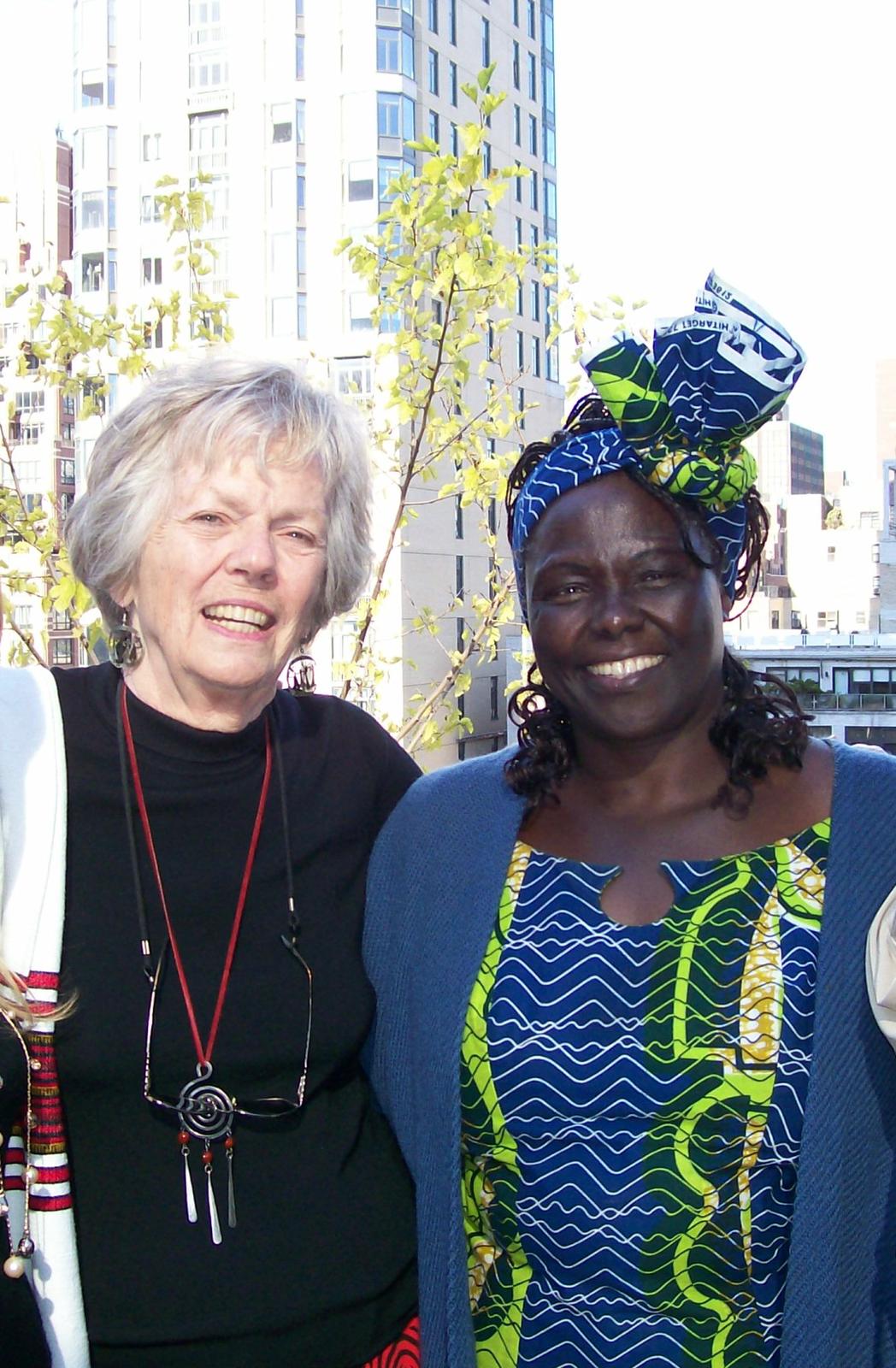 Margaret Snyder, better known to her family and many friends and colleagues around the world as Peg, passed away on January 26, 2021, in her hometown of Syracuse, New York, just four days before her 92nd birthday. Peg was a scholar, a teacher, a writer, and a mentor to generations of younger women, and men, in numerous countries and within the UN system. Peg was also a dear friend over decades of GBM founder, Prof. Wangari Maathai. As a trusted colleague, she served for many years on the board of directors of the Green Belt Movement International-North America. Within the story of GBM’s birth and growth over nearly 50 years, Peg played a pivotal—indeed, essential—role.

As the founding director of the UN Voluntary Fund for Women, which became UNIFEM and is now known as UN Women, Peg was already an expert in the crucial role of women in Africa’s economic development. She’d lived, worked, taught, and studied in Ethiopia, Tanzania, and Uganda, and had visited Kenya many times, including in the early 1960s when she toured tree nurseries set up by rural women. In the early 1980s, Peg and her team at the Fund were looking for women’s organizations to support with grants. Wangari submitted a proposal to the Fund to formalize and expand the work she’d been doing with the Green Belt Movement under the auspices of the National Council of Women of Kenya (NCWK). “I kept my fingers crossed that it would be well-received back at [the Fund’s] offices in New York,” Wangari wrote in her autobiography, Unbowed. It was.

The Fund awarded the Green Belt Movement a “seed money” grant of $US122,700. That was an enormous sum in 1982, especially given the shoestring budget on which GBM had been operating. As Wangari said, “That was more money than I’d seen in my life!” The grant offered the fledgling organization consistent resources and credibility, both much-needed at the time. “The Voluntary Fund’s grant was crucial because it let me expand the Green Belt Movement’s activities and know that the money to do it was there,” Wangari wrote in Unbowed. “Coming from a UN agency, it gave the Green Belt Movement a certain legitimacy that helped other funders feel secure as we sought support from them.” And the funds allowed Wangari to hire and pay staff for the first time.

Wangari always said that Peg was one of the “midwives” to GBM’s birth. “Many people have wonderful ideas, but if they don’t get seed money to develop them, they can never germinate,” Wangari wrote. “Because of the grant [from the Voluntary Fund], the vision I’d had back in the early 1970s was transformed from some talk and a few tree nurseries into the planting of literally millions of seedlings and the mobilization of thousands of women.” (Peg later recalled that Wangari’s proposal had been reviewed. They’d argued, as had foresters in Kenya, that rural women didn’t have the training or skills to plant trees. Luckily, both Peg and Wangari disregarded this argument.

Another outcome of the Fund’s support was a deep and abiding friendship between Wangari and Peg. They first met in person in 1985 in Nairobi. Naturally, they planted a tree together. From then until Wangari’s untimely death in 2011, they were each other’s friends, advisors, sounding boards for ideas, advocates, comforters in hard times, and co-celebrants of joyous occasions. Among these, was the Nobel Peace Prize ceremony in 2004 in Oslo and the marriage of Wangari’s daughter, Wanjira, former GBM board Chair, which they celebrated with a brunch in the gorgeous rooftop garden of Peg’s apartment building near the UN headquarters in Manhattan. Peg had a strong hand, literally, in getting that garden to bloom. She, alongside other stalwart neighbors, would plant and weed and prune until the beauty and resilience of the flowers and shrubs were just about guaranteed.

After Peg formally retired from UNIFEM, she remained as active as when she’d been working full-time. She wrote four books and many articles and served on many boards of directors—GBMI’s and also the [Ellen Johnson] Sirleaf Market Women’s Fund, to name two. She was an informal advisor to senior UN and foundation staff and mentored generations of younger Africans and Americans working on gender equality, development, and entrepreneurship. Although she didn’t have her own children, Peg was viewed as an honorary mother by many whom she’d host over the years in her lovely, aerie-like apartment, which was flooded with light and filled with art, much from Africa and her beloved book collection. Peg was also deeply engaged in the lives of her extended family, including her nieces and nephews.

For sure, Peg was indomitable. You don’t get to be a path-breaking scholar, teacher, writer, UN agency founding director, and feminist without a strong character—especially during decades when women weren’t expected to achieve all that Peg did. And it wasn’t made easy for them to do so. Peg, though, didn’t want to be singular; throughout her life, she consistently opened doors for others to walk through. She was passionate about assisting women and men to find their voices and vocations, whether as scholars, development practitioners, writers, activists, or something else. She was cherished by colleagues and her large coterie of friends for her integrity, honestly, vision, tenacity, and kindness. Peg’s 90th birthday lunch in New York City in January 2019 was a memorable occasion. Guests gathered from many countries—Cameroon, Ghana, the U.S.—and varied facets of Peg’s kaleidoscopic life. Over a banquet of Chinese food, toasts and some “roasts” ensued, along with plenty of laughter and expressions of deep gratitude for Peg’s presence. She loved it.

She also loved to host gatherings, guests (often), and meetings in her Manhattan apartment. Many GBMI board meetings were held there with Peg offering drinks and snacks before she’d settle into her chair, put on her reading glasses, and immerse herself again in the documents up for review and discussion. Even as COVID-19 engulfed New York City in the Spring of 2020, Peg stayed active—and safe—by continuing to walk (masked) and to garden on her rooftop, while reading voraciously, writing, answering emails on her iPad, and looking to the future. In December of 2020, she fell in her apartment. To recover, her family helped her relocate to Syracuse, where she’d been born, about 400 kilometers north of Manhattan. She later developed an infection in her leg and then lung complications, although thankfully not COVID-related. Her passing was peaceful.

Peg is remembered by friends and colleagues as an “extraordinary woman” and “one of the most caring and selfless people.” She is being lauded for “her warmth, her kindness, her wit, and her intellect”, her role as “the UN’s first feminist”, and for the “amazing mosaic” she created “promoting women’s rights and advancement globally.” Within the GBM family, we are reflecting on Peg as “a shining gem,” “a giant,” “an amazing person,” “our lovely, dear Peg” and, of course, as a midwife of extraordinary skill.

A celebration of Peg’s life will take place in New York City once the COVID situation allows a big crowd to gather in person. Her family is asking for donations in her memory to be made to organizations that were dear to Peg, including the Green Belt Movement.

You can learn more about her extraordinary life and the legacy she leaves in this tribute by colleagues Marilyn Carr, Mina Mauerstein-Bail, and Brenda Gael McSweeney and in this remembrance by Barbara Crossette, long-time UN journalist.