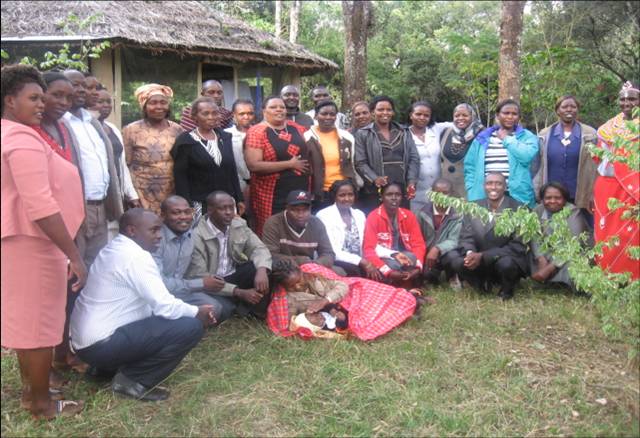 Climate change poses one of the greatest challenges facing the world in the 21st century. The Intergovernmental Panel on Climate Change (IPPC) notes that climate change, if not tackled, will have severe negative impacts on global water supply, agricultural yields, forest ecosystems and the spread of vector-borne diseases, and could result in the displacement of thousands of people from coastal cities and small islands.  This has led the Kenyan government to put in place a Climate Change Action Plan 2013- 2017 to make sure the country is ready and able to adapt to and reduce these potentially devastating effects against the country and its communities.

The Green Belt Movement’s experiences in Kenya have shown how women are the most vulnerable to these effects of climate change and are at the centre of the climate change challenge, especially those from marginalised arid and semi-arid areas. Being in charge of most of the domestic and livelihood activities for their family, most of their time is spent looking for food and water, which are becoming increasingly scarce in such regions especially during times of drought.  In addition, they are seeing how the changing climate, through floods and droughts, have negative impacts on crops, soil fertility, livestock viability and ultimately livelihoods, adding further stresses on their daily lives. Life is therefore becoming more difficult for grassroots women who find themselves managing families in very strenuous circumstances, where traditional livelihoods are under threat and where men are often absent.

There is great need for innovative strategies and practices to alleviate poverty and ensure survival in the face of climate change.

The Green Belt Movement’s Climate Change Programme aims to strengthen the understanding and capacity of rural communities to take action against climate change. As well as raise awareness nationally on the role of local communities and forests in tackling climate change.

As part of the Programme, with support from PRBB Foundation, the Green Belt Movement developed a specialised Training of Community Trainers project which sees local women taught about climate change adaptation strategies that can be used to provide practical solutions to effects of climate change at a local level. The women directly involved in the first training were then able to share the acquired learning and skills to other women in their village. The level of activities carried out in each constituency is dependent on how long Green Belt Movement has been engaged on the ground, the degree of community commitment and involvement, availability of water, quality of soils, climate and availability of financial resources.

The training took place on 13-14th May 2014 in Nairobi during which 50 women from Bomet, Kajiado, Machakos, Narok and Samburu counties were trained to become Trainers of Community Trainers (TCTs).

The women were then sent to their respective counties and trained further 50 women in their respective regions. This enabled the organisation to achieve the objective of training 250 women and ensured that at least 250 households attained the skills from the TCTs in their neighbourhood.

The training focused on the following adaptation strategy areas:

GBM continues to help the women share how climate change impacts them in the hope that their stories will not only help others understand and address their problems, but build greater awareness about women’s concerns within the communities themselves.