The Legacy of Wangari Maathai: Two Years On

This article was published onThe Huffington Post and was written by Mia MacDonald Executive director, Brighter Green and Chair, Green Belt Movement International-U.S and co-authored by Wanjira Mathai, the daughter of Wangari Maathai, project leader at the Wangari Maathai Institute for Peace & Environmental Studies at the University of Nairobi. 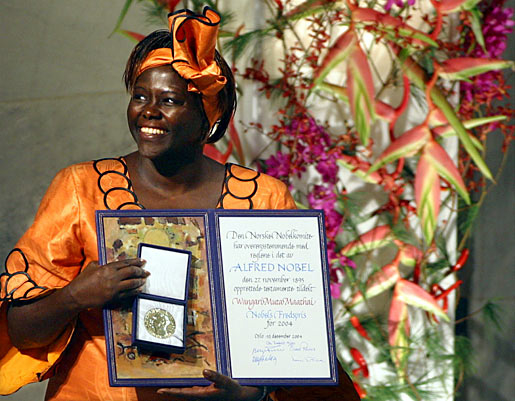 On the day before environmentalist and 2004 Nobel peace laureate Wangari Maathai left Kenya for the United States to receive treatment for the cancer that eventually took her life two years ago today, she voted in a referendum to ratify a new Kenyan constitution. For decades, she and the Green Belt Movement (GBM), the grassroots tree planting and women's empowerment organization she founded in 1977, had campaigned for the protection of Kenya's natural resources -- its forests, watersheds, and fertile lands -- that were being destroyed by land-grabbing, crony capitalism, and ignorance.

The 2010 constitution that Wangari helped draft says that every person has the right to a clean and healthy environment for the benefit of current and future generations, and requires the Kenyan government to ensure that natural resources are managed sustainably and the benefits they provide be shared equitably.

Wangari was proud of this aspect of her legacy, but she knew it wasn't enough. In her final months, between chemotherapy sessions, she worked to link the two great passions of her life: her belief in the need to raise environmental consciousness and her commitment to grassroots development. These two would be merged through the creation of the Wangari Maathai Institute (WMI) at the University of Nairobi.

As Wangari envisioned it, WMI would bring to the academy the experiences of GBM's community-based networks so that future policy-makers, political leaders, and community organizers could understand the realities of ordinary people, and develop far-sighted initiatives to assist them. Students and professionals from across Africa and other continents would also learn from the values on which GBM was founded.

Wangari was haunted by a woman farmer she'd seen on the hillside in Yaoundé, Cameroon, where she'd been attending a meeting on protecting the Congo Basin Rainforest Ecosystem. The farmer was cutting furrows at such an angle that any rain that fell would wash away her crops and precious topsoil with it. Wangari, who'd grown up amid such women, wondered not only if any of her fellow elites understood how desperately this farmer needed appropriate agricultural extension services, but if they even saw her from the comfort of their suites or lecture halls.

Yet without working with this farmer -- and the tens of millions like her throughout Africa and beyond -- protecting the soil, creating food security, reducing poverty, or mitigatingclimate change wouldn't be possible.

Wangari's answer to this central conundrum was WMI, which is now nurturing the first cohort of students: the next generation of change agents whose "vision" will be sharpened so they actually see the challenges before them.

When the Kenyan government announced the discovery of two aquifers beneath the arid region of Turkana that could supply water for 70 years, we asked ourselves: What would Wangari say? We're she would have welcomed the news. But she would have wanted to be certain that Kenyans understood where the water that charges these aquifers comes from, that it was distributed equitably, and how it could be managed to last not just for seventy, but for seven hundred years (or more). She would also have exhorted Kenyans and their leaders not to assume that they could now afford to waste water or to destroy the five forested mountain regions that provide ninety percent of the water Kenyans use today.

If she were alive, we have no doubt Wangari would be deeply engaged in the global climate debate, and promoting the realization of climate justice. She'd be working to protect the forests of the Congo Basin -- one of the world's major lungs, as Wangari would say -- and she'd be keeping her eye on that farmer in Yaoundé and those like her to make sure they were seen and heard in the corridors of WMI and the conference rooms where policy is made and budgets set.

Wangari's death came as a shock to many people: friends, supporters, and those who admired what she'd done or drew strength from her life story. Yet we imagine she wouldn't have wanted to be made into an icon, her achievements judged unattainable by others. Instead, she'd want us to believe in ourselves and our individual capacity for leadership. She'd urge us to make every effort we could to improve the world around us, and to expect that we could. And she wouldn't want us to let the "farmer in Yaoundé" out of our sights.