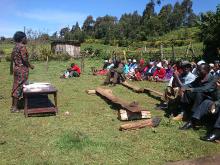 The Green Belt Movement(GBM) is concluding a three-year project on Environment, Health and Population (EHP) inKenya. The project, which began in 2010, sought to promote community consciousness of the interrelation between the environment, health and population and sensitize the community on the various actions that they could take to reduce the threats of rapid population growth to the environment and people’s health.

The EHP project was implemented in NyeriMunicipalityand Tetu, Othaya and Nithi constituencies of Central and EasternProvincesof Kenya. These areas were ideal because they had strong tree nursery groups (TNGs) that had previously been involved in GBM’s tree planting projects. Forty-seven Green Volunteers (GVs) were involved in the disseminating information on family planning and reproductive health to the community. Among the 47 volunteers, were 19 male volunteers who were instrumental in getting men involved in the project. This shows important progress as traditionally, men preferred to stay out of all discussions relating to pregnancy and family planning.

In addition to disseminating information on reproductive health, the volunteers also promoted tree planting and establishment of kitchen gardens as a means to secure livelihoods. Several health institutions including: Wandumbi Dispensary and Kiini, Unjiru, Kalewa and P.C.E.A Minugu Health Centres have taken up gardening and tree planting and we are confident that they will continue with these activities even after the project has been wound up.

The project beneficiaries now have increased understanding and acceptance of family planning methods including bilateral tubal ligation and vasectomy. Even as the project comes to an end, GBM is confident that the GVs and members of the TNGs will continue to share the knowledge they have gained from this project with other members of the community.

GBM would like to acknowledge the United States Agency for International Development (USAID) for donating funds for this project; the ministry of public health and sanitation for endorsing the project; FHI-360 (Family Health International) for training GBM staff and assisting in the development of training manuals and APHIA plus KAMILI for supporting our activities. Lastly, we wish to recognize the health officers, nurses and community health extension officers from the project area for accepting referrals from the GVs and counselling and administering family planning to the community members.