Over 400 people take to Nairobi streets for ‘Stop the Rape’ Campaign launch! 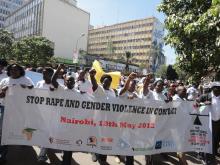 Last Friday, May 18th, over 400 people gathered to launch the International Campaign to Stop Rape & Gender Violence in Conflict in Kenya, one of four initial countries to launch the campaign internationally. The event, hosted by the Green Belt Movement, Physicians for Human Rights, and the Wangu Kanja Foundation, and other partners began in ‘Freedom Corner’ in Uhuru Park early on Friday morning.

Led by a marching band and two rally cars, members of the Green Belt Movement including Wanjira Mathai, streamed through the streets of downtown Nairobi with other local activists and politicians to the cheers of onlookers. After marching past Parliament they gathered at ‘Freedom Corner’ again to listen to the moving testimonies of survivors of rape, as well as speeches from special guests including Finish Ambassador Sofie From-Emmesberger, Maina Kiai - Special Rapporteur on the Freedom of Assembly and Association, and Lady Justice Njoki Ndungu. The Wangu Kanja Foundation also delivered a statement made on behalf of rape survivors in Kenya and to end the ceremony a tree was planted in memory of Wangari Maathai.

Following Maina Kiai’s speech about impunity in Kenya, particularly in relation to post-election violence in 2008, and vocal support from the women of the Green Belt Movement in attendance, the Chief Police Commissioner made his own pledge to partner with the campaign and ensure that gender violence would remain a top security issue ahead of the 2013 elections. 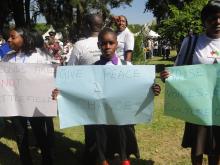 The final speaker, Njoki Ndungu said that men must take responsibility and women must speak out about rape and gender violence. "Rape should really be called differently. It is not just rape, but rather robbery with extreme violence. If I get robbed today and my purse gets taken, I can re-buy it and report it and maybe even prosecute. But if a woman is raped, she loses something she can never get back."

The ceremony ended with the planting of a tree in memory of Wangari Maathai, who was a founding member of the Nobel Women's Initiative, which established this campaign. The well attended launch event was a great beginning for this international initiative.

As the first global collaboration to address rape and gender violence, the campaign demands urgent and bold political leadership to prevent rape in conflict, to protect civilians and rape survivors, and to call for justice for all—including effective prosecution of those responsible. To find out more visit the website and make a pledge to join us in Stopping Rape and Sexual violence in Conflict.