This blog was written by Paul Thiong'o, a GBM Extension Officer in the Upper North Imenti region.

It was now two weeks since the Mount Kenya fire started and it had almost spread to the peak and the upper part of the forest. Every evening I went out of my house, about 10 km from the foot of the mountain, and just stared at the orange patches on the dark mountain. I wondered how the country seemed so at ease when I could see the mountain burning. I had heard form an Army officer how remains of hyenas, buffaloes and elephants were seen in the burnt areas. Early in the morning, I saw how fast the fire had spread throughout the night. The air smelt smoky and hot. During the day, smoke was so intense that it obscured the whole mountain. We had waited for so long for rain to come. We knew that if the rain did not come soon, the whole forest would go up in flames. In villages, vehicles and towns people were talking about the fire. The radio and TV stations also broadcasted messages about the raging fire.

One Saturday morning, on the 17th of March 2012, I woke up early as usual. I received a call that we, the Green Belt Movement (GBM) Staff, accompanied by Green Ranger Volunteers from the region and the Kenya Army – Nanyuki barracks, were going to put out the fire on Mount Kenya. The sun had risen and just as expected, the smoke from the fire had increased tremendously and the mountain was completely invisible.

I took my jungle jacket, put on my boots and filled my water bottle. I met the other GBM staff (Dionisio, Githaiga, Ngunjiri and Njoroge the driver) together with Green Rangers (GR). However, the Kenya Forest Service and the guards we were told were waiting for us further ahead in the forest were nowhere to be seen. Later we learnt it was a lie, there was no guard. Lucky enough, one GR knew the way since he had been there the previous day. Everyone was eager and in high spirits to face the daunting challenge ahead of us.

We drove for about ten 10 km through the forest, negotiating sharp frequent corners, and through several hills and valleys. Occasionally one GR would run ahead of the vehicle to cut one or two protruding branches that posed danger. There were frequent signs that read “TO THE FIRE” along the way, as if welcoming us to hell!

Further up the mountain the tracks became more and more narrow. Some of the army officers had to go back, as their trucks could not go any further. After five km we also faced the same problem and had to walk the rest of the journey. It was at this point that I discovered I was not prepared for the challenge. The Army officers had backpacks, the GBM officers had snacks in paper bags and the GRs had water cans and loaves of bread. One GR even had a 5-liter jerry can of water and to many of us he looked silly to carry that entire load up the mountain.

The journey through thick bamboo forest was not easy. Every now and then, one of us would fall from the slippery bamboo. We walked up and down slopes, crossed several river valleys and hopped over several stony grounds. Stinging nettle burned our hands.

After walking for about 10 km, none of the GBM staff or the GRs had any water left.  We had to silently and shamefully beg for water from the GR who had a 5-liter jerry can. He understood our situation and filled most of our water bottles. Now we were the ones looking stupid!

We crossed the first stream and filled our water bottles. There was no definite path and what led us were instead tracks left behind by elephant caravans through giant Podo and Bamboo forest. The forest was so silent as if there was no life except the cooing of a bird.

After another 10 km, we could hear explosions as fire engulfed bamboo trees. It sounded like a thousand grenades. We were about three kilometers from the fire and from the sound of the explosions, we knew that what we were about to meet was not a burning match stick. However, we trudged on until we could see the fire from 100 m. It was very hot and smoke was chocking all of us.

The sight of the intensity of the fire scared all of us. Trees were falling freely. We stood there, not knowing what to do. It looked so dangerous since it was very windy and I envisioned the fire crossing the valley in the air. The Army officers told us that it would be better if we left at once. We hurriedly took a few photos and shared the little supplies we (except me) had carried along. Every now and then a helicopter hovered above us. We later learned through Ngunjiri that it was the media.

The journey back was not easy either. When we had walked for about 15 km we realized we were we heading nowhere near where we had left the vehicles. We were very angry with ourselves but mostly with the leading GR. There was a brief moment of blame game when we realized it was fast getting late. We retraced our steps for about three km and started on the right track.

After seven hours walk, we were all overjoyed when we reached where we had left the vehicles. All of us threw ourselves to the ground for a brief rest. After a fifteen minute break, we drove out of the forest and as darkness fell we parted ways, too tired to even say goodbye to one another.

In the morning, we (GBM staff) visited a planting site in upper North Imenti. On the way we noted that there was no smoke coming from the mountain and it was now clearly visible. The fire was no more. We were relieved that although we had gone all the way to put out the fire and not been able to, it had rained on the mountain that night and the rains had put out the fire. Unfortunately, the fire that had engulfed almost all the moorland and considerable section of the bamboo forest was gone.

It was a really interesting experience for all of us and we planted a Podo tree in Laikipia Airbase in memory. 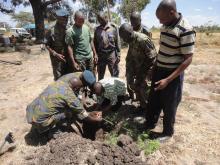