Where is the LOVE? Kenya Roses on Valentine's day

A look into your Valentine’s Day roses

Researched and written by Sam Wilde with contributions and editorial input from Francesca de Gasparis, commissioned by Ecohustler blog 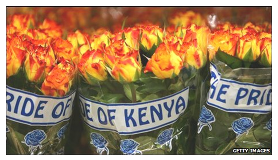 Red roses have become the quintessential symbol of love. This Valentine's Day, boyfriends, husbands and lovers alike will flock to their local flower store to buy a dozen red roses - an embodiment of their love, passion and commitment.

Thousands of miles away, people in Kenya face a different reality on the 14th of February. It's not one of e-cards and chocolates but an effect of globalization; a side effect of capitalism that many are not aware of.

One in three roses sold this Valentine's Day in the UK will be from Kenya. Despite the 4,600 miles travel, Kenyan flowers are often the cheapest; a dozen Kenyan red roses are as little as £2.99 or £4.99. Yet these prices do not reflect the social and environmental costs.

Nearly 75% of Kenya's horticultural exports are a product of the cut flower industry around Lake Naivasha. It is an important livelihood for many Kenyans being the second largest export after tourism

Lake Navaisha was once a quiet community best known in the UK for being the home of naturalist and wildlife preservationist Joy Adamson who wrote Born Free about Elsa the lioness; for being one of the 10 best sites for bird watching in the world; and for its abundant plant and animal life: hippos, giraffes and zebras to name a few.

Today giant green houses occupy the banks of the lake, which has wrecked its aesthetic value as well as the local culture. While Maasai cattle may still be found roaming the area, private property rights and division of their traditional range lands have dramatically decreased the spaces that they can graze and access to the lake for water has become a source of conflict

A new culture has been brought to the region that revolves around capitalism. Lake Navaisha's flower industry began in the 1980s and grew rapidly in the 1990s. The region offers desirable growing conditions with temperate temperatures year round and seemingly abundant water supplies. The hundreds of thousands of pounds of flowers grown annually are picked in the morning and arrive in British shops by the evening. 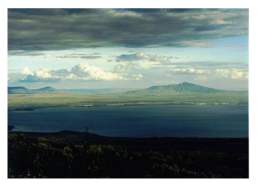 The economic boom of the horticultural market has led to a dramatic increase in the local population. In 1969, 27,000 people lived in the surrounding areas and today that number has jumped to nearly 300,000.

Water levels in Lake Naivasha have fallen as a result of the flower industries that directly pump water from the lake to the green houses. The lake is currently being drained faster than it can be replenished.

Erastus Mureithi, the chairman of the Kenya Flowers Council, says that small-scale flower farmers are likely to be banned from withdrawing water from the lake. Without the involvement of the major flower companies, this move appears to be more of a public relations stunt than a solution to the environmental problems of Lake Navaisha

Furthermore, the once clear waters of Lake Navaisha are now mucky and brown as a result of the rapid clearing of trees for agricultural production. This problem is not unique to Naivasha. Rapid removal of indigenous tree species around the country and particularly in water catchment areas has led to major siltation problems and has dried up rivers and threatened lakes.

Siltation, pesticides and other toxic chemicals, and invasive species such as the Louisiana crayfish and water hyacinth, have significantly reduced the health of the Lake Naivasha. These effects combined with overfishing, a result of increased populations and capital pressures, has forced many traditional fisherman to work on the flower farms or find other ways of survival.

"The fish trade is no longer as lucrative as it once was. It is very obvious that many leave that career very frustrated. In turn, they take out their anger on the rest of society," said Eric Kiraithe, Kenya Police spokesman.

Operating with these unsustainable methods will certainly result in the disappearance of Lake Naivasha and the further decline in the traditional livelihoods of the surrounding communities- a travesty that can be stopped. 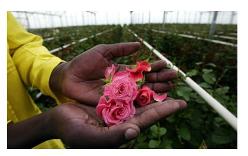 In order to curb environmental degradation, organizations, such as the Green Belt Movement, are working at local, national and international levels. The Green Belt Movement has planted over 40 million trees in Kenya and works with communities who live in the uplands above Lake Naivasha to protect the watershed to empowers communities with the skills to think and act sustainably. However the issues surrounding the lake its self and access remain complex and sensitive.

Its founder, Nobel Peace Laureate Professor Wangari Maathai, said in her keynote speech at the launch of the United Nations International Year of Forest on February 2nd that "It is not that we do not know. None of us can claim ignorance. We know what to do. Much information is out there."

Let us not claim ignorance this Valentine's Day. Instead of playing a part in promoting the side effects of capitalism, think sustainably- you can buy fair trade roses from Kenya for less than £5. Or as an alternative to roses, think about giving a tree- a symbol of your love that will last for a very long time.