Sasha Hank: Climbing for Women and the Environment 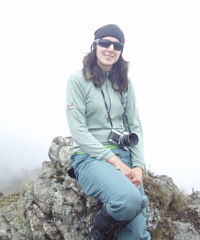 At 2 am on the 2nd of November 2011, Sasha Hank set off on her final ascent to Lenana Point, the peak of Mount Kenya. In the darkness, she trekked through rock, sand and snow before she made it to Lenana Point – sitting 4,985m (16,355 ft) above sea level. Sasha and her companions reveled in their triumph as they sat among the clouds on the third highest peak of the tallest mountain in Kenya. Her accomplishments extended beyond the mountain for Sasha’s trek was one of dedication and commitment to the Green Belt Movement (GBM).

Sasha started her journey months earlier when she took up the challenge to climb Mount Kenya and raise an amazing £3,500 ($5,429) for GBM. She first learned about GBM after reading Professor Maathai’s autobiography, Unbowed, and was inspired by the struggles, determination and successes of Professor Maathai and the Movement. Her interest led her to GBM’s website where she discovered GBM’s Trek Mount Kenya Challenge and immediately knew she wanted to get involved. After signing up for the trek, she began fundraising through emails and her JustGiving page. With perseverance, she raised £3,785 ($5,861) – over £285 ($442) more than the target!

Sasha had never been to Kenya or Africa before, nor had she done anything like the challenge, but she was completely open to the experience and savored that “never before” feeling. The trek showed her a new country and gave her an insight into other cultures. Sasha’s trek opened a window into life in Kenya, how people in rural Kenya live and what their values are. When asked about her experience Sasha says “I felt invigorated by the challenge and it is something I would do again.”

Sasha stood at the top of Kenya. She climbed for women and the environment. She climbed so that GBM can continue to fund projects that mobilize community consciousness- using tree planting as an entry point- for self-determination, equity, improved livelihoods and security, and environmental conservation.

*Exchange rates for USD were calculated on Jan 6th, 2012.