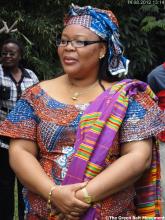 On 14th August, Leymah Gbowee, 2011 Nobel Peace Prize Laureate, visited the Green Belt Movement (GBM) Offices in Kilimani, Nairobi. Her visit was in celebration of Professor Wangari Maathai to plant a tree. During her address to the small crowd and press assembled, Ms Gbowee fondly recalled the moment when Professor Wangari Maathai was awarded the 2004 Nobel Peace Prize.  At the time, she was attending the African Regional Conference on Women (Beijing+10), in Addis Ababa. As soon as the announcement was made, women at the conference began to celebrate, dancing and shouting “finally Africa, finally Africa.”

Ms Gbowee described Professor Maathai as a “trail blazer”; a woman who stood for what she believed in despite for many years not having much support from the wider public. She also applauded GBM for keeping its founder’s dream and legacy alive and for its efforts to promote peace by addressing environmental concerns.

She also shared how in 2011 when Tawakkol Karman, President Ellen Johnson Sirleaf and she were awarded the Nobel Peace Prize, she felt sad. As a Nobel Peace Laureate, she would have loved to be able to turn to Professor Maathai, the first African female Nobel Peace Prize winner, for guidance.

Fortunately, another African Nobel Laureate, Archbishop Desmond Tutu, has been there to provide support through with the new challenges of being a Nobel Laureate. Ms Gbowee said keeping her focus on her community where her work began despite the many international issues needing attention is one of the issues she is facing.

When the press asked Ms Gbowee what the “big story” of her day was and why she was in town? She simply replied “This is the story of the day” pointing fondly to the Warbugia Ugandesis tree that she had just planted on the GBM grounds, near to where Professor Maathai had planted her own Nobel Peace Prize tree in 2004. She went on to say she was now “part of the GBM family”. And GBM felt trulyblessed to welcome her. 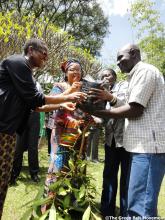 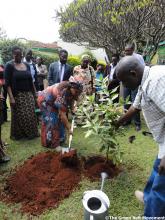