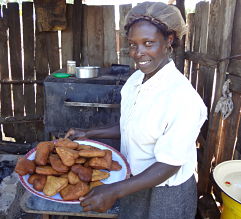 This January, the Green Belt Movement (GBM), with support from Agence Française de Développement (AFD), began filming our upcoming documentary to show the lessons learned from the AFD Aberdares Rehabilitation Project that started in 2006. The objective of the project was to plant 2,000 hectares of degraded forestland with indigenous trees. To date 3.8 million trees have been planted on 3,800 hectares of public and forestlands. Nearly double the project objective! GBM tree nursery groups grew indigenous trees and planted them in strategic areas that will in time increase tree cover, having a positive impact on ecosystem services like water volume and biodiversity.

The rural women and communities who form the tree nursery groups have been essential in the overall success of the project. Through GBM’s Civic and Environmental Education (CEE), the communities learnt about the linkages between destruction of forests, rainfall patterns, the volume of waters in rivers, and how that impacts on agricultural productivity and socio-economic problems that they face. The complex issue of climate change and how it makes communities and ecosystems more vulnerable is a part of this training. There are 593 nursery groups in the Aberdares who have, through this process, become advocates in their communities, leading sustainable lifestyles and setting an example for others.

With the benefits of knowledge and practical actions to address these issues have come further challenges. GBM has an excellent network of women and men who care for the seedlings from germination to planting out in the forest. Once the seedlings have been planted, Green Rangers care for them by weeding, replacement, and ensuring the overall survival of the trees. Despite their care and effort, destruction in the forest continues including livestock grazing in the forest, forest fires caused by charcoal burning, and lack of adequate rainfall.

During the filming we heard many stories from the communities on the project’s impact. One such community member is Rehab. Rehab joined College Tree Nursery Group in South Kinangop 3 years ago. She enthusiastically told us how being part of GBM has improved her income, knowledge and welfare of her family. The benefits from working with the nursery group are not just through tree planting and support from the group. For instance, the group purchased an oven with money earned from tree planting compensation and are now baking cakes to sell in the local market. The money earned has helped her buy sheep thus the cycle of improvement continues. At the end of the interview, she took my hand and happily said, “I will be planting trees for the rest of my life!”

Rehab’s story was not alone. We heard from many members from around the region telling us how the project has helped them. Check out our Facebook page to see photos of College Tree Nursery Group’s IGAs and more from the trip!

We’ve wrapped production on the documentary and look forward to sharing more stories from the project like Rehab’s with you. Follow us on Twitter to be the first to hear when the documentary will be released!